Walking the Portuguese Camino de Santiago is an unforgettable experience, both physically and mentally.

Whether you choose to walk the Camino as a pilgrimage to the Memorial of the Apostle Santiago or not, as you walk by the hills and valleys of the Way of St James with the goal of reaching the magnificent Cathedral of Santiago de Compostela, you'll find that is not only an adventure, but a spiritual journey within yourself and with the hikers you meet along the way. A true pilgrimage - a spiritual commitment marked by faith, culture, nature, people and the sharing of stories that cross each other along the Camino.

The first pilgrimages by the Portuguese Camino de Santiago date back to the 12th century. Since then, the number of pilgrims in this route hasn't stopped growing, as several pilgrims opt for it due to religious or cultural motives, as this is a journey through time and space and where one can experience stunning landscapes, flavors, heritage and traditions. With them, the pilgrims take the 'Pilgrim Credential' - often collected at Sé Cathedral, Porto's Matrix Church - where you collect stamps of the places you walk by, and turn in for a Compostela certificate at the end of your journey, if you chose to walk the Camino as a religious pilgrim. 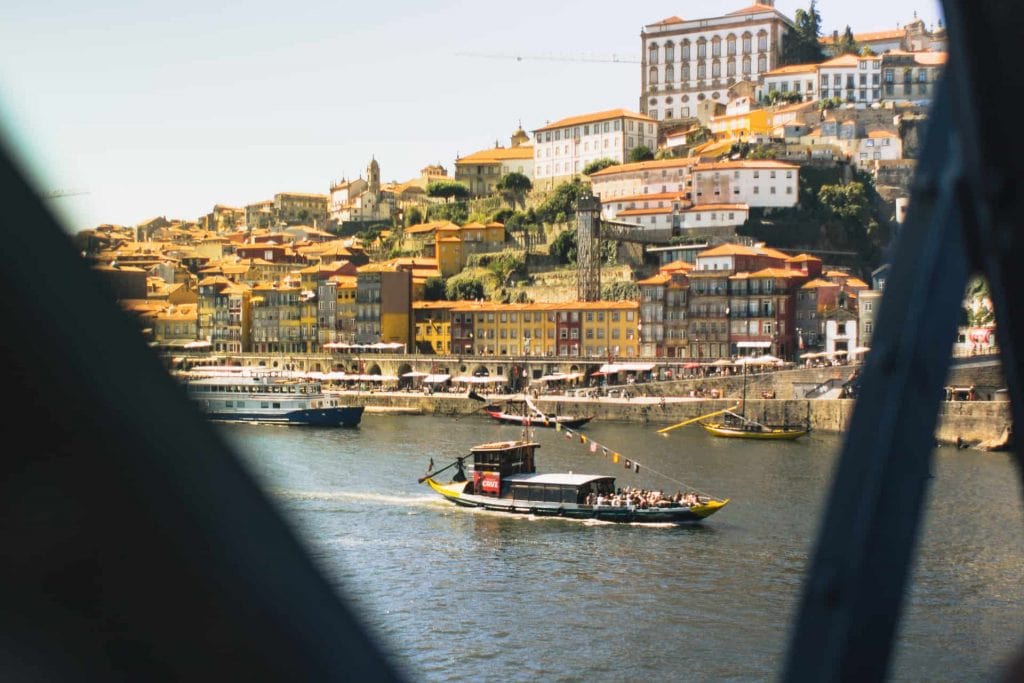 History of the Camino de Santiago

The tomb of Santiago is thought to have been discovered in 814, in the reign of King Afonso II, by the hermit Pelaio, from the Libredón Forest, who saw shooting stars on consecutive nights over a hill in the forest. Excavations were then ordered by Bishop Teodomino, from Iria Flávia - the most important city in the region at the time, 20 kilometers away from Compostela -  where a marble arch was found, with the remains of what were thought to belong to the Apostle Santiago and some of his disciples. The King had a chapel built in that place and the first pilgrimages followed. The growth of the flux of pilgrims visiting Santiago de Compostela led King Alfonso III to build a majestic church in place of the primitive one in 872 and also changing the episcopal seal of Iria Flávia to Compostela. However, this would not be the last church to be erected as, in the reign of Afonso IV, the construction of the current Santiago de Compostela Cathedral started. It was built between 1075 and 1128, matching Romanesque style with Gothic, Renaissance and Baroque details.

Today, the Santiago de Compostela Cathedral is the third most visited Holy Place of Christianity, after Jerusalem and Rome. But the historical research is nowhere near complete and, despite the legend, some studies indicate that the remains found in Compostela could be from another Apostle rather than Santiago, who would be in the Church of Saint-Saturnin in Toulouse, France. Due to the lack of certainty about the true location of the tomb of Santiago, in recent years there has been caution when talking about this theme, with John Paul II referring to the “Memorial of Santiago” and Benedict XVI referring to the Compostela Cathedral as being “linked to the memory of Santiago”, abolishing the word tomb.

The pilgrimages really gained momentum from the 1980s onwards, as pilgrims chose to arrive to Camino de Santiago by various routes, the most famous ones being the French Camino, the North Camino, the Vía de la Plata, the Finisterre Camino, the English Camino, the Primitive Camino and the Portuguese Camino,  which traditionally starts from Lisbon or Porto, the last one being the most popular starting point, where pilgrims can choose to follow the coastal or the central path towards Compostela. 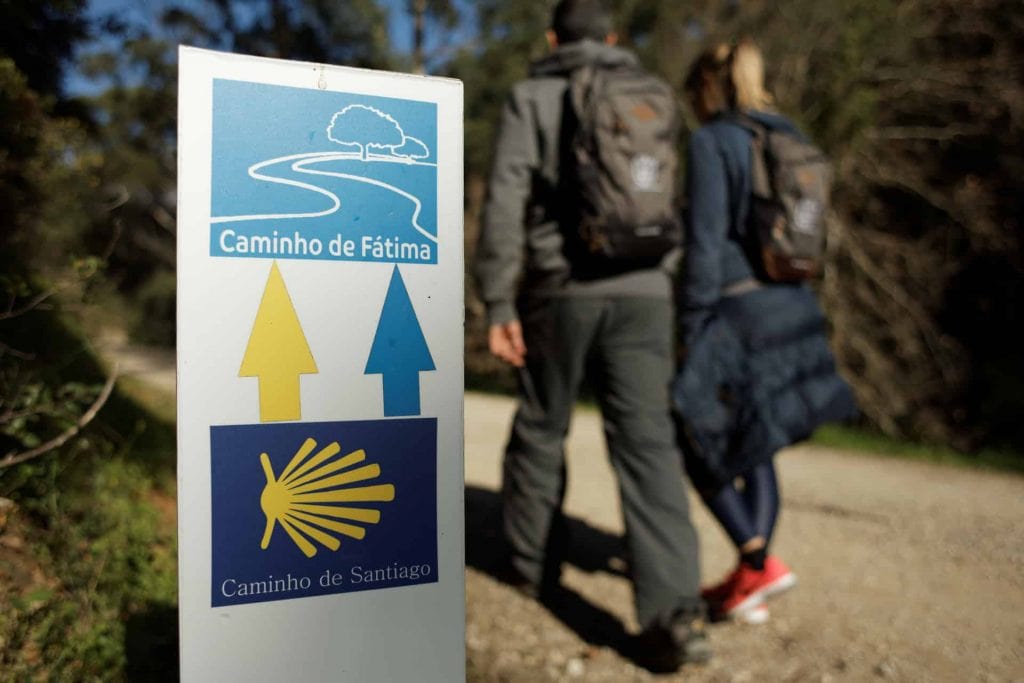 From Porto, head on to Sé Cathedral to pick-up your Pilgrim's passport - this document is essential for those who look to complete the Camino as a religious pilgrimage - stamp it at least twice a day and, once you reach Santiago, you can trade it for a Compostela certificate, at the Pilgrim's office. As you follow the famous yellow arrow and scallop shells by Porto's city center, you'll be able to visit the several historical points of interest in the city. While the central Camino will lead you towards "Rua das Flores", "Torre dos Clérigos" and "Avenida dos Aliados", the coastal path will lead you towards "Ribeira", by the Douro river, as you walk towards the Atlantic Ocean, enjoying the sights over Vila Nova de Gaia's wine cellars, were Port wine ages in cork oak barrels.

There are several places to visit alongside the Camino before you reach Spain. By the Portuguese coast, the Camino is more forgiving, as there is less altimetry or technical trails until you reach Vigo. By the coast, you'll be able to visit "Praia da Memória, where you can admire the Obelisk of Memory, built in honor of D. Pedro IV's victory over his brother D. Miguel, in the Liberal Wars; Vila do Conde, an ancient Portuguese settlement packed with historical value, like the "Santa Clara convent" and it's well preserved medieval streets; Viana do Castelo's striking Sanctuary of Santa Luzia and Cathedral; Caminha's medieval old town, before you cross the Minho river ( by ferry) towards Galiza, in Spain. If you opt for the central Camino, once you leave Porto, you'll find that this is a more technical and rural atmosphere with highlights being the historical city center of Barcelos, an ancient roman settlement famously know for it's folk tale of the "Galo de Barcelos"; "Ponte de Lima", nicknamed the "oldest village in Portugal", named after the medieval bridge that  uns over the Lima river; conquer the climb up to the French cross in "Labruja" before reaching "Rubiães", a former Roman village; explore "Valença"'s fortified walls, where you'll find small, quaint medieval streets packed with history over looking the Minho river, the natural border between Portugal and Spain.  Throughout both paths, you'll find countless little medieval churches and temples, understated restaurants with a homy feel, and a rural and contemplative atmosphere.

Once in Spain, the Coastal and the Central Camino will meet, in "Redondela". If you follow the Coastal path towards Spain, before reaching Redondela, you'll get to pass by  the Royal Monastery of Santa Maria de Óia, a former Cistercian Monastery founded in the 12th century and explore Baiona's medieval city center by the outlet of Vigo's bay.  As you hike towards Vigo and it's "Ria", you'll get a glimpse at protected areas such as the Cíes Islands, a part of the Atlantic Islands Maritime Terrestrial National Park. From Vigo -  the biggest city between Porto and Santiago de Compostela - you'll reach "Redondela", where the Coastal and Central Camino meet. If you chose to follow the central Camino, your fist glimpse into Spain will be in "Tui", where you can explore it's medieval atmosphere and marvel at the Romanesque and Gothic style of it's Cathedral; you'll hike by the rural trails of Galicia as you reach "O Poriño" first, and then Redondela where both paths meet.

After Redondela, where the Camino become one, you'll cross the Sampaio Bridge over the Verdugo River, formed by ten arches, from where the village takes it's name. Soon after, you'll arrive in Pontevedra, whee you must take your time to explore it's magnificent its historic center, where you'll find the Basílica de Santa Maria a Mayor, dating from the 16th century, and the Church of la Virgen Peregrina. The next village on our route, Caldas de Reis, is famous for its lamprey pies, butter bread and most importantly, as a Thermal resort for former Spanish kings. And,  as you are getting closer to Santiago, you'll pass by Padrón, where you can enjoy the view from the Santiaguiño do Monte Viewpoint, where Apostle used to pray, according to legend. Also, in the area, both the Toja Falls - the highest in Galicia - and a visit  Don Pepe II Bar, a must for all pilgrims in Santiago, are not to be missed. 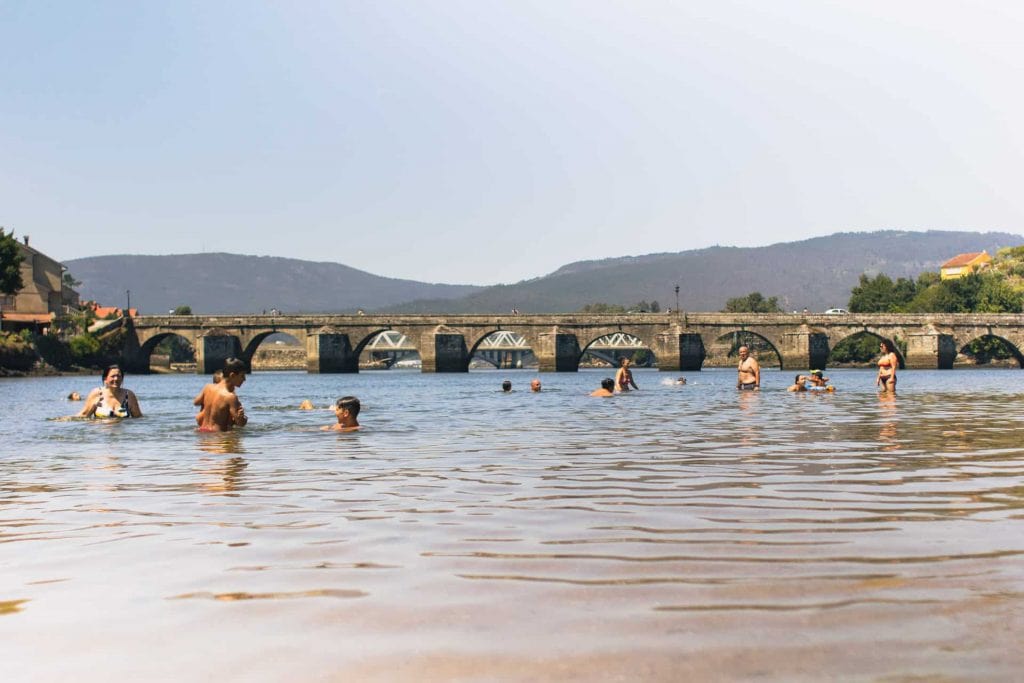 As you arrive in Santiago de Compostela and reach the highlight of the pilgrimage - the entrance to the magnificent Cathedral - you'll experience much more than the end of an adventure. You'll remember all the pilgrims that have crossed your path, the new experiences you lived and the difficulties you conquered along the Camino. It is said the Camino neve truly ends, and we are firms believers in that. Whatever the reason you have to join this adventure, hiking the Portuguese Camino de Santiago is an experience of a lifetime!

Click here for more information on our guided hiking tour from Porto to Santiago.

Also, if you are planning to discover Portugal on foot, check our quick guide about Walking in Portugal, where we talk about when to go and the best regions to go hiking in Portugal, among other insider tips.