Nearby Porto, in Northern Portugal, the UNESCO world heritage site of the Douro valley offers some of the best trails for Hiking in Portugal...

Alongside the river Douro, in the northern region of Portugal and east of Oporto, magnificent hills cut out by man-made terraces compose a distinctive landscape which yields unique conditions for the production of wines, amongst which the prestigious Port wine. 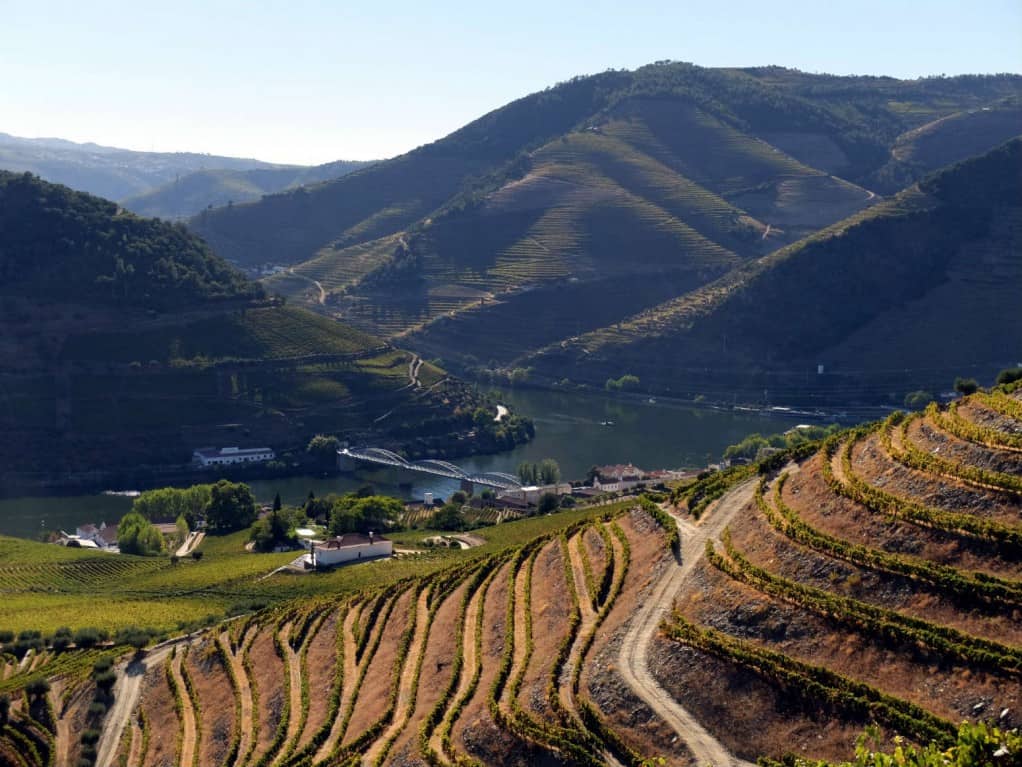 Ever since the Roman occupation over 2000 years ago, man has produced wine in this region. Later settlements continued this cultivation, but it was only in the late 17th century that wine production in the Douro valley started gaining dimension and importance, after the British embargo on French wine boosted the demand of Port wine. Following came the expansion of production and eventually of the region itself, much of it remote and inaccessible until then. At that time, the transportation of goods and passengers to the mercantile city of Oporto was made by boats — such as the Rabelo — through rapids and narrow gorges of the fast-running Douro.

Wine estate in the vicinities of Pinhão, with Hotel, Restaurant and wine tastings

Nowadays, we get to the little village of Pinhão in less than 2-hour by car (or 2 hours 20 minutes if we’d come by train — which is a delightful trip by the way!) and head straight to the hotel to check-in and relax for the rest of the day. We start hiking the Douro valley (or Alto Douro) tomorrow and everyone’s excited. No wonder, we have just arrived to the heart of the first wine region to be legally demarcated in the world, and an UNESCO world heritage site:

- The components of the Alto Douro landscape are representative of the full range of activities association with winemaking — terraces, quintas (wine-producing farm complexes), villages, chapels, and roads.
- The cultural landscape of the Alto Douro is an outstanding example of a traditional European wine-producing region, reflecting the evolution of this human activity over time.
(source: https://whc.unesco.org/en/list/1046)

On the following day at 9 am, we’re all set for our Hiking tour in Douro. Still chilly and not a cloud in sight — looks promising! Starting off the charming little train station in Pinhão and heading towards one of the wine estates, we go up the hill and into the vineyards. It’s October now, and the average maximum temperature in this region is 22ºC (or 72ºF). Besides this time of the year, the best months for trekking in the Douro valley include April to June, and September. 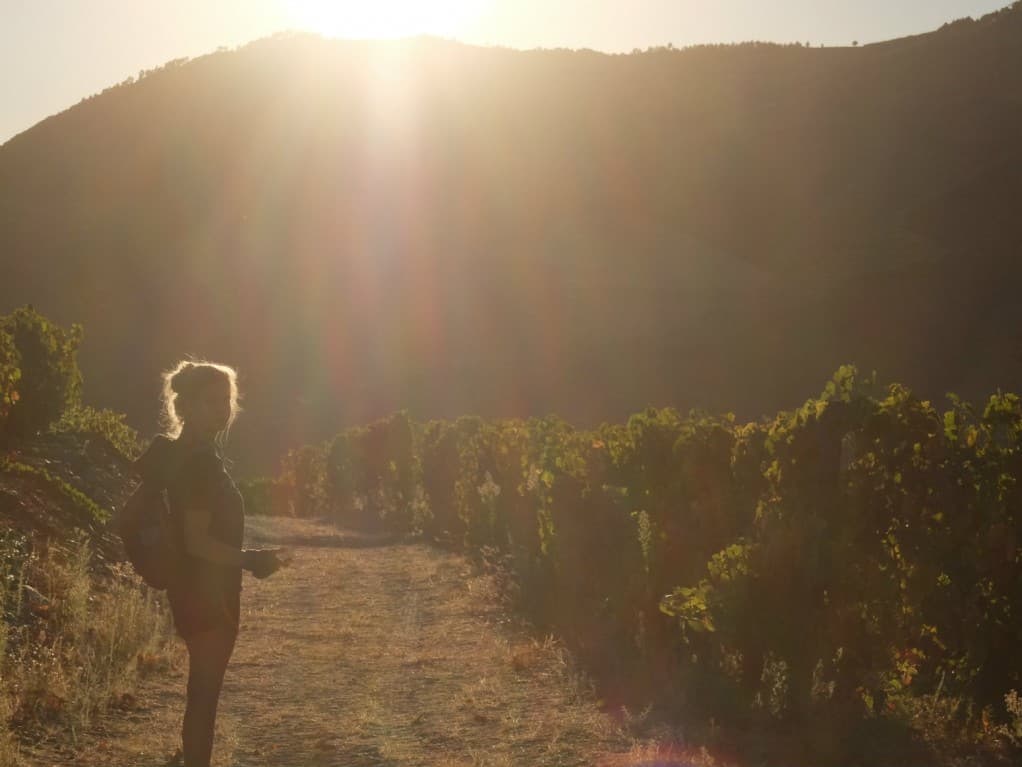 “Next time you should try coming in September, when the grape harvesting season begins!

It’s a lovely morning, and as we continue our hike an immersive silence embraces the unaccustomed “city ears”… The sun keeps getting higher in the sky and we’re about to reach the small village of Casal de Loivos. We’re half of the way now and just got to the highest point of our walk, so we stop for some rest and a quick snack. Other hikers cross our path for the first time — we have been on our own since Pinhão, as if we were in our own vineyards!

The group admires the different forms of organizing the vineyards. The oldest are planted on traditional terraces sustained by dry stone walls. Modern terraces are more inexpensive and quick to build but present more disadvantages. So, in recent years, the technique of vinha ao alto has been perfected so that terracing can be replaced by vertical rows of vines running perpendicularly up the hillside. 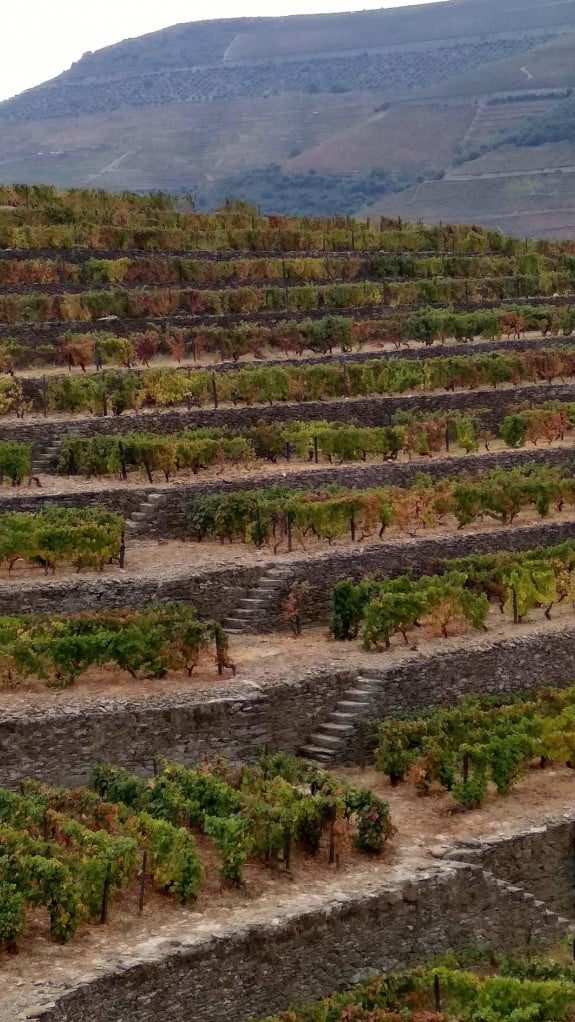 No one is actually tired, but it feels good to go down for a change. Despite the snack, the hike has been building quite an appetite on everyone, so a friendly discussion about lunch arises: I, personally, prefer the roasted octopus (Polvo à Lagareiro), but both the grilled seabass and the roasted lamb with turnip greens collects many fans. Yet a dessert conquers everyone, a cake made with Port wine: the delicious bolo borrachão!

The trail leads us around the hilltop and, as we start our descent through the vineyards, there’s the river again! The scenery never ceases to amaze, and everyone is just glad to be there. We continue along the dirt paths, occasionally picking a grape or two that were left behind after the harvest in September, and Pinhão becomes closer by the step.

The sun is now hot, as we arrive to the restaurant by the river, just in time for lunch. The healthy debates resumes between laughs and smiles. In the following days we’ll have the opportunity to savor many of the delicious treats of the Portuguese cuisine, as well as going on a river cruise and doing a wine tasting, among many other secrets that the Douro valley unveils as it welcomes the hiker.

Next time, we are hiking by the Douro along different trails, while we explore this magnificent and unique region of Portugal - towards east, to the historical villages of Portugal.

Join us on our Walking tour by the Douro Wine Country!

So if you are planning to discover Portugal on foot, check our quick guide about Walking in Portugal, where we talk about when to go and the best regions to go hiking in Portugal, among other insider tips.